Matt and I weren’t planning on having a third child, if I were to be candidly honest I would admit we weren’t actively planning on having the first two children. But that’s a story for another time, or really not at all because it’s fairly obvious how they all came about anyway. My point is that life before with two children had a sort of balance to it, a chaotic yin & yang, but a balance. Then Devon came, he was born with that bum heart and everything seemed to get out of control; it was as if we’d all stepped on a treadmill gone awry and were all just trying to hang on lest we trip and get a toe ripped off in the process. And who want to be walking around a toe or two short?

Things with Devon have mostly worked out to the point where I’m not 100% on edge with worry. He is a healthy, rambunctious nearly 7 year-old boy who loves to play, make noise, get dirty and then snuggle. But there remains an issue with him, a sort of inevitability of fates when we are out and about. When walking with the dogs in a field, if there is cactus? He’s gonna end up with one embedded in each of his hands without even touching the damn things in the first place. If there is a loose splinter on a log upon which he’s teetering? It’s totally headed for at least one or two of his fingertips. A closed glass door? Dude’s gonna do a Wiley Coyote and end up flattened like a pancake and then slipping to the ground while muttering muffled, WHY’S????

It’s not that he’s a full on klutz, Devon is actually very sporty and coordinated. He keeps up in Frisbee with his older brother and his friends. He can do all sorts of flips on the tramp and off of taller objects on to the tramp, much to my horror. Devon is also a fabulous skier and, also to my chagrin, an amazing video gamer. He swims, flips off the edge of the pool, can almost ride a bike. But. If there’s a random accident waiting to happen…..

The other afternoon I took Loren and Devon with me while I ran some work related errands. One of them involved stopping by the Big Office to drop off some newsletters in employee mail boxes. I informed the boys that we would all be quiet and invisible while I went about my task, they were cool with it. All was good, the boys met some employees, made chit chat and then…as we headed upstairs somehow Devon became airborne. He was literally horizontal but hovering a couple of feet off the ground. Of course gravity got the better of him and he came to rest with his face mashed around a stair edge. When he sat up his two front teeth remained behind and two small faucets of blood began to stream from his precious mouth. Then came the screams, the trail of blood, the frantic wiping of blood from hands.

A couple of co-workers helped us fetch ice and wrap it in clean coffee filters for Dev’s mouth pain. I cleaned Devon up while he wiggled in pain and Lo retrieved the teeth, wrapping them in tissue. Then we got the hell out of there as quietly as possible. Devon went so far as to crawl under tables so as to remain low key.

The one tooth was super loose and ready to come out while the other one was only slightly loose. The Tooth Fairy was a big ole sucker for the story and so was super generous to Devon to the tune of $10. And now when people ask how he lost his teeth he either acts entirely oblivious or launches in to the gory tale. Because if there are tooth eating stairs out there Devon is the first they will encounter and engage for battle. 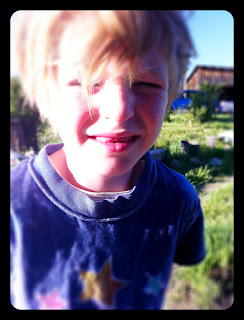 This is Devon's new smile, well sort of since he had just woken up and the sun's mere presence was annoying him. 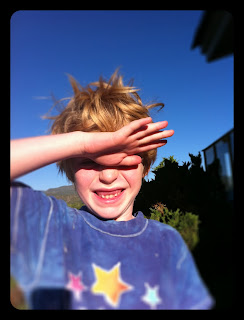 He his mouth looks like it used to because his lower teeth are stuck in the enormous vacancy from the last teeth. I miss his baby teeth and am somewhat broken hearted to see my last baby growing up.
Posted by That Uncomfortable Itch at 1:38 PM