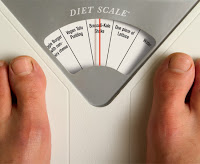 Back in the day I used to be a ballet dancer. Notice I didn't say ballerina, to me that means I was in a paid company and made my entire life be about dance. I was in a high school company and then a college company, I made no money and ballet was about 97% of my life. I loved it. I loved the daily ritual of warm-up at the barre, then centre work. I loved being totally in sync with my body and I looooooved being in wicked amazing shape. And although I probably could have eaten to my heart's content during those years, I didn't. Dancing eight hours a day and then skipping a couple of meals made me look all that more hot. God, I hope my 14 year-old daughter never reads that last sentence.

Fast forward to my early twenties when I got knocked up by a tall drink of cool water. Although my dancing days had tapered down to just a few classes per week, I still ate sparingly and kept in good shape. But sometime in the early part of my second trimester I got hungry. Hungry in a way that made me bitchy because I didn't know what to do. Yes, I was that out of tune with reality. I can't recall the exact sequence of events, only that Matt took me out to the Olive Garden and for the first time in my 22 years I discovered the joy of consuming food. Oh. My. Fucking. God. It was so good! It was beautiful! There were tastes. Textures. And the variety? Pastas with sauces! Breads with butter! And desert?????? It was truly a religious experience. So I kept eating. and eating. I ate in a way that had the OB team alarmed at my next visits. They thought I should maybe slow down. Could they not see I was eating for two? That food was good, dammit?

After I had Loren it took me about a year to lose most of the weight. The eating thing was still so amazing to me. Then I had Cass, nursed her and the weight came off again. Then seven years later Devon rolled on to the scene, I got post-partum depression, took Prozac and gained the equivalent of a baby. I hit the weight I was when I gave birth to Loren, 150 pounds. Then my dad died, I went on the cake and wine diet for a few months and maintained that awful number for a couple of years.

Two years ago I stopped eating wheat and luckily had the summer off from work. It enabled me to go for daily swims, long bike rides and I got down to nearly my pre-Devon weight. I felt good. I bought clothes and I vowed to never again get up over a buck fifty. This year has been a bitch in a half and apparently my way of dealing with it has been to stuff all the problems in my mouth and hide them in my belly where they'll never bother a soul. I have been harboring so much stress in my stomach that I got back up to 150. Fucker. It had gotten to the point where I had stopped wearing underwear and I could only where two pairs of my pants, both drawstring style. And although I totally rocked the drawstring, I suck at laundry and two pairs of pants simply doesn't cut it for me. But nor could I bring myself to buy more big girl pants.

As luck would have it, Matt intervened and suggested a juice fast. Then, since he has this summer off from work, he combined several plans and made it into a four week long effort. We are just finishing the first phase, food elimination. It started a week ago by cutting out one major thing per day. Friday was caffeine, Saturday, alcohol, And so on. Today is the last day of that, we cut out oils and vinegar today. Then it's on to three days of raw veggies, fruits, seeds and nuts. Then follows three days of smoothies, though they won't be a tasty without vanilla ice cream in them. Then it's 10 days of fruit and veggie juices, followed by a 5 day re-entry to regular foods.

So far I'm loving this. Maybe it's because when I cut out wheat two years ago, I learned how to make a big dietary change. Maybe I'm psychologically ready for next phase of life. Or maybe my body is just so damn tired of carrying around 25 extra pounds of me. In the last week I've lost nearly three pounds and I'm up to three pairs of pants in the rotation, one of them even has snaps.
Posted by That Uncomfortable Itch at 12:00 PM