As I mentioned yesterday the juice fast has been going really quite well. Over the weekend there was an annual celebration, Mountain Fair, where there are crafts, jewelry, fabulous drinks and more food than one can possible dream of eating. It's what heaven would look like if I could make it so. Most years I plot which vendors I'll frequent and what drinks I'll have with them. This year I ended up buying a fabulous cashmere sweater because I spent no money on eats or drinks, and it wasn't a sacrifice to do so. Actually, the 100% truth to that last statement is that I had given the kids all my money and I talked Matt, who was perhaps or perhaps not delirious with hunger, into buying said sweater. But it's a fabulous sweater and once it gets cold again it will be amazing with a pair of leggings....

So no solid food was all good, juice was good, I had a new sweater and was shedding pounds left and right. Turns out yesterday I hit a wall. That wall was painted with the color bitch, it was still wet and I got it all over me. Yup. I was so hungry, as in HUNGRY, DAMMIT! Luckily Devon stayed the night with Matt so all I had to deal with last night was Cass and my mom. Fair enough. But no. Cassidy had been at her summer job all day, teaching swimming lessons and training to be a lifeguard for next summer and she had done a mile in laps on top of teaching three classes. Girl was hungry, too. And my mom was feeling slightly peckish from her day. So they decided to go all out. I'm talking soups with sausage in it, some sort of gourmet bread dipped in olive oil. And then, if that wasn't enough? Cass decided she wanted brownies. As they baked I thought I had died and gone to the hell I have long deserved for all my daily, hourly, caddy comments. It was a smell so divine I would have gladly sold Devon to the circus for just one bite. I informed Cass and my mom I believed them to be truly evil minions of Satan and they laughed as they informed me that the gluten in the brownies would send me to the ER. I told them it didn't matter, they were horrid, awful humans and I was planning to abandon them and go live in an ashram to find inner peace. Again they laughed. So I went to bed and fell asleep in a puddle of self-pity, which I tried to eat but it lacked flavor.

This morning I woke up hungry and shaky. I've had some juice: beets, carrots, spinach, a few grapes, apples and radishes. The scale wasn't overly kind this morning, I lost a quarter pound yesterday. Really? REALLY? For all that self-discipline all I get it a something the equivalent of McDonald burger and it doesn't even taste good? Namaste. Three more days of this and then I'm-a-gonna chew me some food.

Below are a couple of pictures from the above mentioned fair. Devon had just finished singing on stage. He had spent the week at a singing camp and had learned such classics as "Crocodile Rock" and "Sweet Home Alabama". Precious beyond words. As far as family portraits go it's slightly awkward with Lo's hands stuffed in his pockets while he seems to be thinking, "Why is my mom doing this to me?" Whatever. 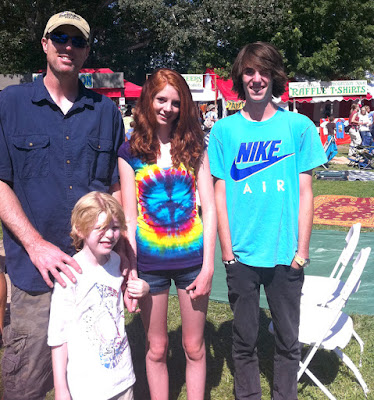 The next picture captures the true joy that is Cassidy and her BFF Ticah. The two have been thick as thieves since they were in diapers. Notice the cup of lemondae Cass is holding. I suspect after that she ate a funnel cake and then had a piece of pizza anf then perhaps a gyro. There are words for people like that.... 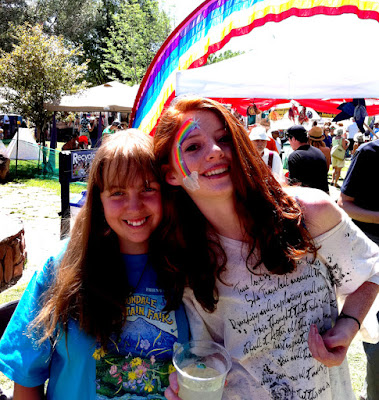 Posted by That Uncomfortable Itch at 11:06 AM