As mentioned above, today is number six out of ten days of the juice fast. Depending on who you ask things are going really quite well. If one were to ask me, I would point out that my tongue is no longer covered in white goo in the mornings. If you one were to ask Cass, well she might point out that right before my feeding times I might appear slightly bitchy. Whatever, she's 14 and prone to drama. Not to be trusted , her. Thus far I've shed nine pounds. That's right, count those! I now have a staggering number of maybe five pairs of pants in the rotation and a couple of dresses. My breasts aren't bursting out of my bras and I'm even back into some of my fun panties, not just the extra large Hanes, five to a pack that I get at Costco.

Despite my new found wardrobe expansion I don't intend to stick out 60 days of this madness. This ends Saturday night. At that point I'm going to make friendly with a zu-canoe and then On Sunday some more veggies that I'll actually be able to chew. Simple things for simple minds.

A couple of weekends ago, Matt, the kids and I went to Denver to check out Loren's soon-to-be new pad. We stayed in LoDo close to where Lo and his friend Evan will be spreading their wings and living out in the real world. It's going to break my heart when Loren leaves but I fully understand this is the natural progression of events and he needs to get out of the nest. Across from our hotel was an enormous blue bear peeking into the convention center. It made for some good fun. 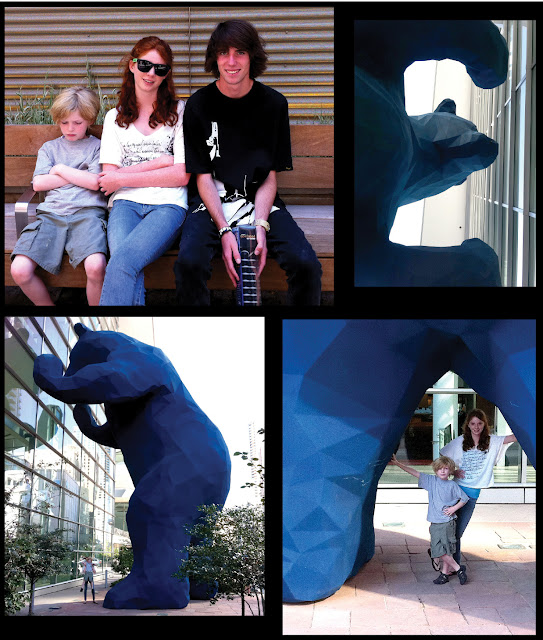 This summer I've been taking every opportunity possible to capture my three children in one place at the same time. Not an easy task and one that inevitably ends up with somebody pissed off. Big deal, they can just deal with it. In about a week Loren will move to Denver to work for a semester before attending film school so these moments will be even farther and fewer between.
Posted by That Uncomfortable Itch at 4:28 PM